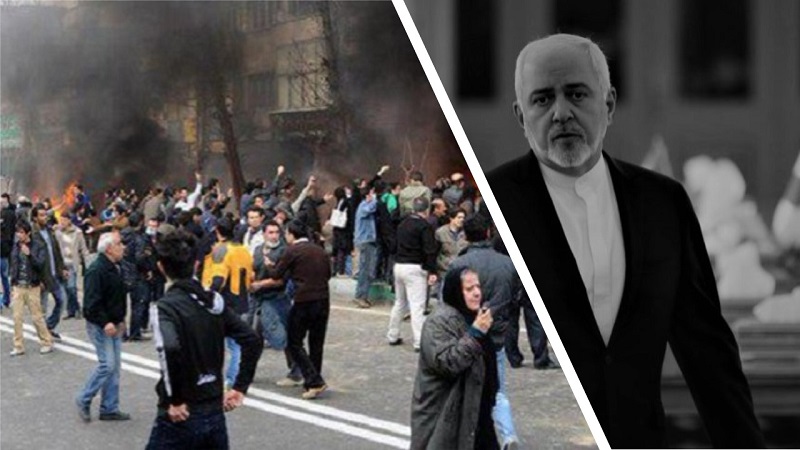 The agency said the reason for the cancellation of Zarif’s trip was possibly in connection with the Iran protests that have rocked the country in recent days and the regime's record of human rights violations.

Zarif was scheduled to attend the “Rome Med 2019 – Mediterranean Dialogues” event, an annual high-level initiative promoted by the Italian Ministry of Foreign Affairs and International Cooperation and ISPI (Italian Institute for International Political Studies) in Rome.

Commenting on the cancellation of Zarif’s trip to Rome, Shahin Gobadi, press spokesman of the People’s Mojahedin Organization of Iran (PMOI, Mujahedin-e-Khalq or MEK) said:

“Javad Zarif is the chief apologist of the religious dictatorship ruling in Iran in the international arena. He called off his trip in fear of the expression of outrage on the international level over the regime’s crimes. During the November nationwide uprising in Iran, at least 750 protesters were confirmed killed by the repressive forces, according to the network of the People’s Mojahedin Organization of Iran (PMOI/MEK) inside the country. The actual number of victims is much higher. At least 12,000 protesters were arrested and more than 4,000 wounded. Subsequent to partial opening of the Internet in Iran, more details of the crimes perpetrated by the regime against the defenseless protesters is coming to light.”

“The protests were a turning point in the struggle of the Iranian people against the ruling theocracy. There is a new balance of power between the people and the resistance on the one hand, and the regime on the other. Despite the ruthless crackdown, the clerical regime cannot to contain the situation and it constantly expresses its paranoia of another public eruption.”

“Javad Zarif and all of the officials of the regime must be held accountable for crimes against humanity. Any invitation to these criminals amounts to complicity in the crimes perpetrated by this regime. The mullahs’ regime must be banished by the international community.”

The blood of more than 600 martyred protesters shot to death by Khamenei’s revolutionary guards and the rebellion inspire all of us to continue the uprising to sweep away the religious fascism. #IranProtests https://t.co/nViycitlyY pic.twitter.com/6wZtnWYFBj

On another account, the Italian human rights group, the Italian Federation for Human Rights (FIDU), had written to Italian Prime Minister Giuseppe Conte and Foreign Minister Luigi Di Maio regarding the crackdown in Iran following the recent nationwide anti-regime protests.

"The FIDU - Italian Federation for Human Rights follows with attention to what is happening in Iran, where since November 15, the Government’s decision to suddenly triple the price of fuel triggered protests in dozens of cities in Iran. This decision, as you know, is only one of the many signs of a situation of grave political as well as an economic and social crisis, which for years the regime of the ayatollahs has been trying to control with an insular impression," the letter said.

"Just in the first five days of protests, more than 200 protesters have been killed by the Basij militia and other repressive forces in cities such as Tehran, Shiraz, Isfahan, and Khorramshahr. Reports also indicate thousands of people have been injured or arrested. The Islamic Revolutionary Guards Corps opened fire on peaceful protesters, who courageously called the authoritarian regime responsible not only for the economic collapse of a country that is among the largest oil producers in the world, but also for systematic violations of human rights, of grave corruption and violations of women and ethnic, religious and linguistic minorities."

"After many democratic governments, such as France and the United States, expressed firm condemnation for the bloody repression of demonstrations by the Iranian regime, we believe that the gravity of the situation requires a similar, decisive stance on the part of Italy, which has a pillar of its own constitution in human and civil rights, as well as its commitment to the international community."

"We ask, Mr. President, that the Italian government clearly condemn the bloody repression of demonstrators in Iran and the blatant violation of part of the civil liberties that the regime is obligated to adhere to by international law," the letter added.