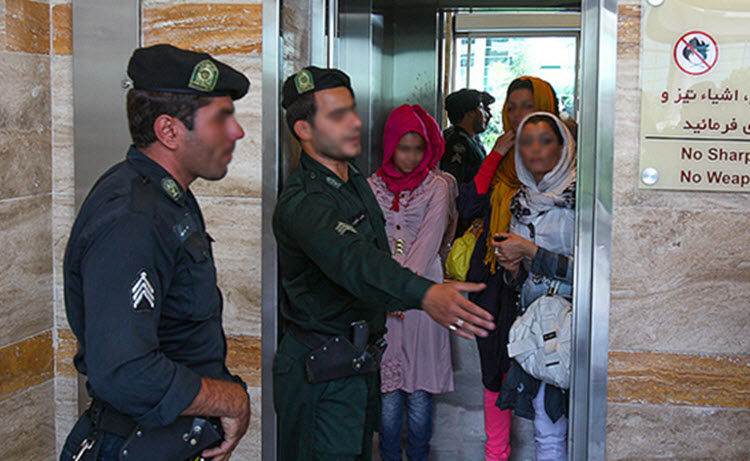 NCRI - Iranian police have threatened women with lengthy prison sentences for participating in protests against the compulsory veil. The police said in an official statement last week that women could be charged with “inciting corruption and prostitution”.

Since December, there have been dozens of women attacked and arrested in Iran for peacefully protesting against compulsory veiling – a practice that Amnesty International has described as “discriminatory and abusive”.

This is just one more example of how the authorities in the country are escalating a violent crackdown on the rights of women.

The Deputy Director for the Middle East and North Africa at Amnesty International, Magdalena Mughrabi, said: “This is a deeply retrograde move by the Iranian authorities in their ongoing persecution of women who dare to speak out against compulsory veiling. It places many women at serious and immediate risk of unjust imprisonment while sending a chilling message to others to keep quiet while their rights are being violated.”

She added that women’s rights in Iran are violated by authorities that are compelling them to cover their hair. Mughrabi said that this practice has been going on for decades and goes against their dignity. “Rather than threatening women with jail terms for claiming their human rights, the authorities should immediately abolish the discriminatory, abusive and degrading laws and practices of compulsory veiling.”

Reports and videos are circulating on social media, and last week Maryam Shariatmadari was seen being violently pushed off a concrete structure. She has been seriously injured and requires surgery, but is being held in Shahr-e Rey Prison and is being denied medical attention. The following day, Shariatmadari’s mother - Mitra Jamshidzadeh – was detained for over a day in a detention centre in the country’s capital. Her lawyer has advised that she was violently attacked when she tried to find out where her daughter was being held.

According to Iranian law, veiling is compulsory. However, international law states that this is a blatant violation of numerous human rights. It is discriminatory and denies females the right to freedom of expression, thought, conscience, religion and privacy.

A spokesman for Iran’s judiciary said that women who are not properly veiled are being instructed by “organized criminal groups” or are acting under the influence of “synthetic drugs”.

Amnesty International is calling for law enforcement officials that are condoning such actions to refrain from making any more statements that incite further human rights abuses.

Furthermore, the NCRI Women’s Committee has called on all international organisations defending human rights and women’s rights to urgently act so that all women who are jailed as a result of improper veiling are immediately freed.

The committee has said that the people who are protesting are “honorable and brave” and has urged the people of Iran – in particular women and young people – to defend them and to support their families.

Iranian authorities have said that 29 women have been arrested for not being veiled.

This practice is unacceptable is further proof that regime change, as per the request of the nation, is the only way forward.