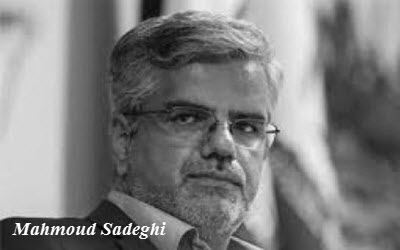 NCRI - The factional feuding over the bank accounts of the Iranian regime’s head of Judiciary, Sadegh Larijani, continues.

On Monday November 28, Abbas Jafari Dowlat-Abadi, Iranian regime’s prosecutor in Tehran, told state-run news agencies: “The arrest warrant of parliament member ,Mahmoud Sadeghi was in accordance with the law and is still in force.”

“According to a written report by Police, the accused resisted arrest by the agents on Sunday night November 27 and prevented implementation of the order by making noise. He then disobeyed the officers and by sending SMS messages and publishing (the news) in websites and local news channels and republishing in counter-revolutionary websites asked for help and presence of people in front of his house which somehow has been a kind of inciting people to engage with the agents…,” he added.

The regime’s prosecutor in Tehran said: “Some of the MPs are expected to instead of supporting each other, obey the law and not allow a person with unconventional measures cause disobedience of others.”

“Mahmoud Sadeghi’s actions of resistance against officers and inciting people for gathering and presence in front of his house is disruption of public order and considered an offence which is added to his previous charges and he should be held accountable,” he added.

Dowlat-Abadi said at the end: “It is expected that Mr. Sadeghi respects the Judiciary’s order and presents himself to judicial authorities otherwise the officers are obliged to arrest the accused and introduce him to the court.”

On the other hand, Mahmoud Sadeghi, member of Iranian regime’s parliament, emphasized on exposing corruption in the regime’s Judiciary system. He wrote in his twitter account on Monday: “I will not give up against pressures.”

Mahmoud Sadeghi, who recently called for publishing a report on the Bank accounts of mullah Sadegh Larijani, escaped the agents who were dispatched to his home to arrest him at night on November 27.