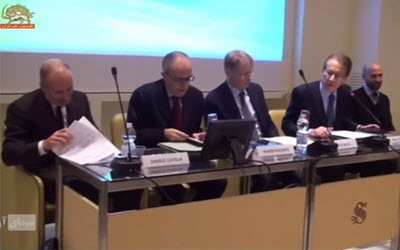 NCRI - On November 22nd 2016, a seminar was held in the Senate of Italy in various panels against the wave of executions in Iran. During the seminar, the speakers rejected any appeasement and economic transactions with the Mullahs' regime which holds the world record in the number of executions. The participants also called for a decisive measure against the waves of executions as well as Iran's terrorist meddle in the region.

At the beginning of the seminar, the member of the Italian Senate, Senator Lucio Malan stated: “the human rights situation in Iran has deteriorated and this is not worthy of our country to greet and welcome the representatives of such regime. I am glad that the Italian Senate responded to our call."

The former Italian Foreign Minister, Giulio Terzy also said: “the main part of the economy is managed by the Iranian Revolutionary Guards and this issue cannot be positive for our country."

The member of the Finance Committee of the Parliament of Italy,Daniele Capezzone said: “we defend democracy, freedom, and human rights. We have to break our silence and address the issue of human rights in Iran."

Elisabetta Zamparutti from the forum "Do not Touch Cain". In her speech mentioned the 1988 mass execution of 30000 political prisoners in Iran, She pointed out that many of those who perpetrated the killing of prisoners are now in power in Iran. She also asked the supreme head of EU foreign policy to consider the issue of human rights violations in Iran and, in particular, the executions and to put these issues at the center of negotiations with Iran.

The member of the Finance Committee of the Italian Senate, Senator Anna Cinzia Bonfrisco stressed: “we should not establish any relationship with a government that continually violates human rights.

The president of the Italian League for human rights, Antonio Stango said, there is no such thing as the election in Iran and there are only wars among the fractions of the regime. The university professor of law, Ranieri Razzante explained how the regime is engaged in money laundering in trade relations with countries and within its territory. The professor of the international relations in Italy, Daniele Caviglia stressed that the Mullahs' regime is continuously meddling in the region and it is casting its dominance over the countries. The managing director of "Geopolitico" magazine, Dr. Luciano Tirinnanzi also contended that those who govern Iran intend to establish and develop a warmongering policy in the region. Dr. Aurelio Mancuso in his speech rejected the issue of ignoring the continuous violation of human rights by Iranian regime on the pretext of commercial relations. He stated that the executions and the widespread repression of the political opponents and women, in particular, are still going on in Iran.

In this meeting, the head of "the Free and Democratic Syria" forum in a speech mentioned the complicity of the Iranian regime in killing the Syrian people and pointed out: “over the past years, more than 600 thousand Syrians have been killed and 10 million people have been displaced. There are more than 5 million immigrants from Syria." Dr. Enrico Vandini also said that the Iranian regime has spent billions of dollars to help Assad's regime and it plays a major role in killing the Syrians.