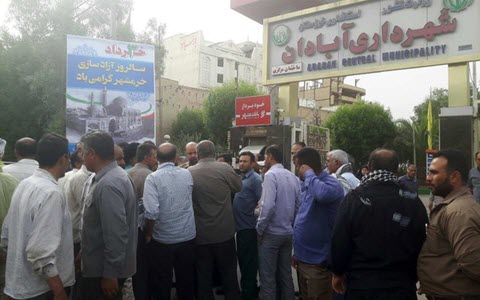 NCRI - A group of service and municipal ground keepers, located in Boroujerd, Lorestan province (South West of Iran), staged a protest for their unpaid wages in front of the regime’s gubernatorial building in the city. The rally took place on Sunday, May 28, 2017. Demonstrators said, “Their salaries have not been paid for 5 months. Apart from the unpaid salaries, municipal agencies haven’t helped them in supplying any goods for Ramadan.” In the municipality of Boroujerd, more than 1700 workers are employed, their wages have been paid late for several years.

A group of municipal workers in Abadan, Khusitan province (South-West of Iran) also gathered to protest their unpaid salaries for months in front of the city council.

According to obtained news, more than 200 municipal workers staged a rally in front of the city hall in Abadan to protest five months of unpaid wages on Sunday, May 28, 2017. Protesting workers said: "We are the forces that are working through contractors in the municipality of Abadan. For years, we have not being paid on time, and now it has been five months that we have not been paid.”