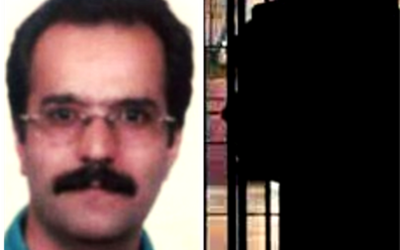 I am Hassan Sadeghi, a political prisoner incarcerated in Gohardasht prison in Karaj. My right eye was damaged as a result of torture in Evin prison in the 1980s and now the same eye has developed glaucoma. Despite the fact that they (prison officials) delayed my appointment for emergency surgery for two months, the prosecutor ordered a ban on my appointment for today's surgery in Farabi Hospital in Tehran and conditioned my dispatch to the hospital to wearing handcuffs and shackles and prison uniforms. Indeed, they practically refuse to transfer me to hospital since they know that political prisoners do not yield to such humiliation. This is despite the fact that I am practically on the verge of blindness.

In addition, last week they similarly prevented my meeting with my children and also my wife, who is incarcerated in Evin prison. This injustice and oppression comes at a time when Larijani shamelessly brags about human rights in Iran and on the other hand brazenly calls the International Human Rights Office [proposed to be established] in Tehran a “nest of corruption.”

This is while the regime’s leaders today admit and acknowledge the systemic corruption and everybody knows that the source of the multi-trillion dollars thefts and plundering and all kinds of financial and moral corruption is the Supreme Leader’s (Khamenei’s) house (spider nest) and the real nest of corruption is there. Also, instead of embarrassment and accountability to the people for their moral and financial corruptions, they threaten their plaintiffs.