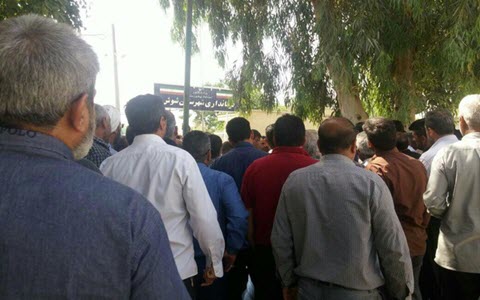 NCRI - A group of retired workers, from the Haft Tapeh sugar cane agro-industrial complex (southern Iran), gathered and staged a protest to demand their unpaid dues on the morning of Monday, May 29.

According to more than 350 workers who participated in the rally, since March 2015 when they retired, they have not received their claimed pension from their former employer.

The complex owner hasn’t paid its 4% pension share to the workers’ social services for difficult and dangerous tasks, according to the protesting workers. Also, they haven’t received their productivity shares for 2015 and 2016. Workers have emphasized that they have protested in several occasions, but so far none of the government agencies have responded them.